Public space is a physical place, but it is also an ideal.  As Bernd Belina points out, “for many theorists, ‘public space’ is the spatial, material form of the ideal of the public sphere.” It is where we expect to meet, ideas are hatched, and freedoms are exercised.The idealization of public space means we place intense value on protecting it. In Police Strategy Number 5, then New York City Mayor Rudolph Giuliani and Police commissioner William Bratton issued a manifesto for policing “broken windows” justified by the perceived decline of public space. Giuliani and Bratton introduced their memo by writing “public spaces are among New York City’s greatest assets… [but] enjoyment and use of these public spaces have been curtailed.  Aggressive panhandling, squeegee cleaners, street prostitution, ‘boombox cars,’ public drunkenness, reckless bicyclists, and graffiti have added to the sense that the entire public environment is a threatening place.” As Giuliani and Bratton’s list suggests, the perceived decline is often forced by the behavior of what Belina terms “undesirables,” the squeegee cleaners and homeless who seemingly menace public space.

But not all of the menaces are groups of people–some of the threats come from behaviors like playing music, consuming alcohol, or biking, with all these categories being laced with ambiguity. Where is the line between reckless and normal bicycling?  When does panhandling become “aggressive”? When does behavior crossover from mere inconvenience to menace of public space?

Theorists have tried to give further definition to undesirables and their behavior.  For some, it is a matter of degree. Wilson and Kelling write that “arresting a single drunk or a single vagrant who has harmed no identifiable person seems unjust, and in a sense it is.  But failing to do anything about a score of drunks or vagrants may destroy an entire community.”  For others, like scholar Don Mitchell, authorities will crack down on any behavior that threatens the order required for the easy investment of capital and the tastes of new urbanites. All these definitions leave ample room for interpretation, giving authorities broad judgment over what is orderly or not. 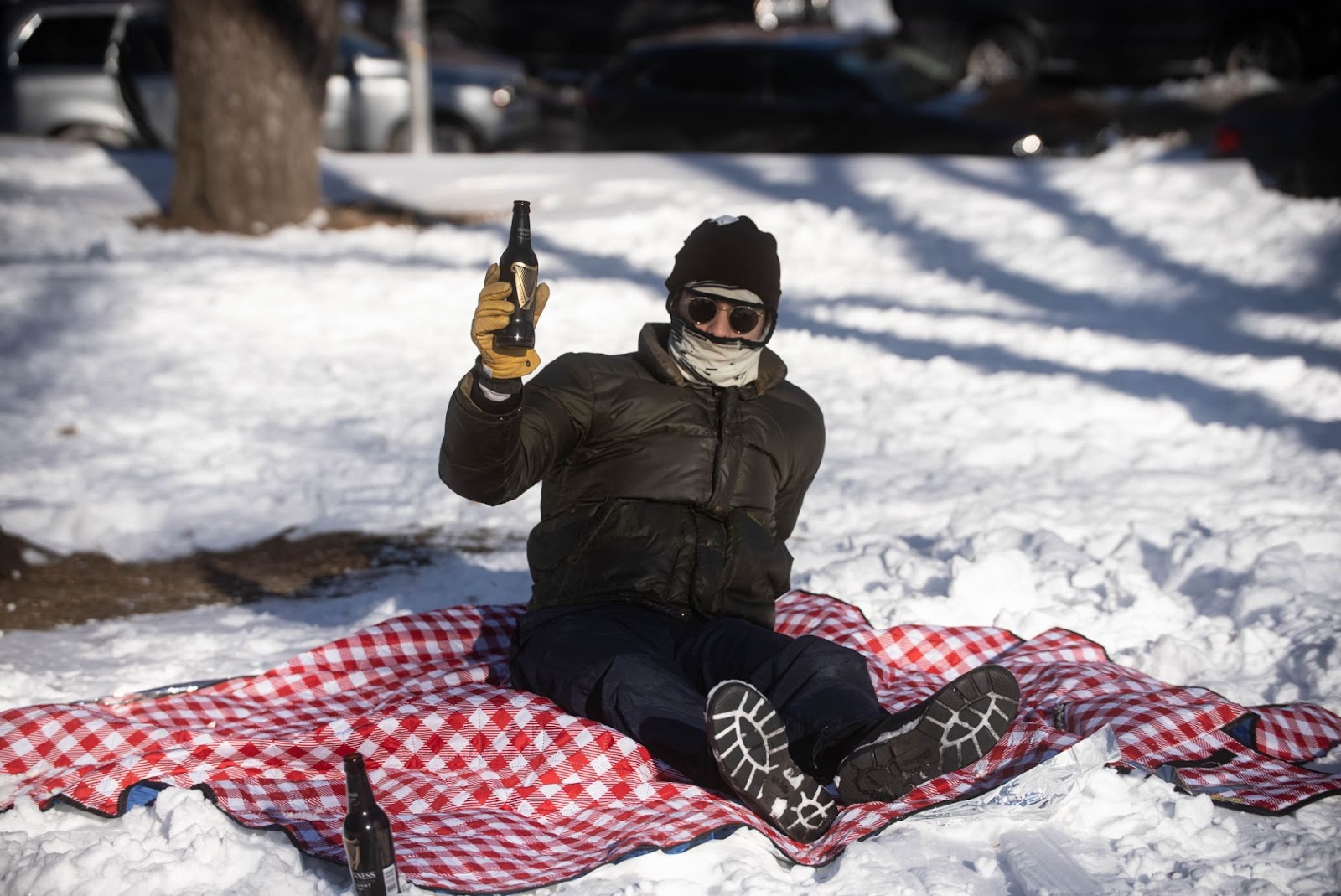 The pandemic years offered further examples of the contradictions of orderly public space.  As New Yorkers were driven to the relative safety of the outdoors, I observed all types of behavior in my local parks such as yoga classes, birthdays, picnics, dance lessons, and performances.

The day CNN called the 2021 presidential election for Joe Biden, the park became a raucous party. People danced, sprayed sparkling wine on each other, and lingered into the night playing music and barbecuing.  These activities were undertaken by residents in a highly gentrified corner of brownstone Brooklyn and attracted little attention from the authorities. Later in the year, the police clashed with a diverse group of young people in Washington Square Park who had set up loud parties that lasted well into the night.

This April, the NYPD and Parks Department dismantled an outdoor weightlifting gym that Black community members had set up in Marcus Garvey Park and operated informally for nearly 20 years. New Yorkers of every stripe were engaging in “disorderly” activity, but only some of it was treated as a threat.

Race and class distinctions help explain the inconsistency of policing these behaviors, and I could not help but notice the aesthetic inconsistencies abound. On paper, yoga and weightlifting are both forms of working out.  A New York Times column describing the Marcus Garvey Park clearance noted that “the [mayor Eric] Adams administration seems to be waging an indiscriminate war against the aesthetically displeasing.” As the police moved through subways this summer waking up homeless people sleeping on the train, I thought of times in the past when I, dressed nicely for work, had been allowed to sleep uninterrupted.  Is the act a threat to order or is it just certain presentations of it? I was reminded of what the writers of The Wire described as “one of the greatest civic compromises” – the brown paper bag wrapped around a beer bottle.  Sometimes all you need to get away with something is to make it look a little bit nicer to the people in power.

With this series of photos, I tried to recreate and exaggerate behaviors in public spaces that have been frowned upon in literature, from lifting weights to cleaning windshields.  All of these activities were performed on a classic, red gingham picnic blanket, an accessory to perhaps the most widely accepted use of public space: picnicking. The gingham blanket, in particular, is supposed to cue a widely accepted Americana. The blanket is a metaphorical “brown bag” meant to blur the line between the activity happening on top of it and a sense of respectability. Aware of my own position as an educated, relatively affluent, and presentable man performing these activities, I am trying to give a sense of some of the contradictions of orderly public space, a concept planning theorists have wrestled with and whose ambiguities authorities have exploited for years.

Matt Choi is a second year student in the masters of urban planning program at Hunter College and a native of Brooklyn.  He is interested in the management, creation, and theory of public space.

All images are credited to the author Matthew Choi and photographer William Hart.

Need help with the Commons? Visit our
help page
Send us a message
Skip to toolbar

Built with WordPress Protected by Akismet Powered by CUNY